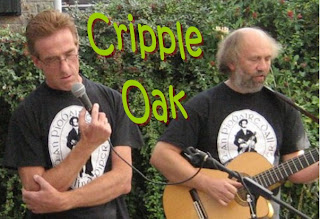 Actually the 1+1 idea matured during the gig I had last thursday with some of my old Doggy Dike friends in the cosy little pub in the most beautifull place of Leiden called "Estaminet Schommelen". Though we didn't do one of my own songs, I wouldn't have missed that lovely night, singing and playing.
Posted by Siem at Sunday, April 15, 2012